Oy-vey!
This tome took me nine months to read. Ok, perhaps six, but a long time. Every paragraph of this mentally – and physically – heavy book forced me to stop and ponder what I just read and what I felt about what I just read. Deep stuff.. constantly.. relentlessly… but all true. 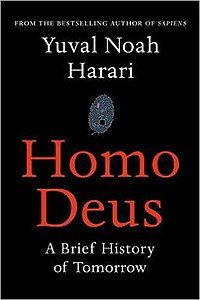 This guy Yuval ponders and details how the human species took ultimate control of and now dominates all other species on the planet. Methodically, factually, and convincingly. He does so by asking the simple questions about unanswerable and unknowable facts, exposing all points of view.. then moving on. Moving on to the next big unanswerable question and methodically laying out probabilities. And them moving to the next.

The book is set up as a contemplative and questioning guide to the truth of live and humanity as we know it, and where we may be headed but between the lines Yuval has the answers and knows the future. Or at least, is nudging us to uncover the answers to the future truth we need to discover from our past for ourselves.

The human species dominates the globe and controls, subjects and blatantly discriminates freely against all other species and the lower class, minority segments of the human species as well. However, as he slowly makes us see – hopefully we all see sooner than later – that the natural evolution that made humans king will soon make the superhuman products of technology and the master algorithm king of us regular humans.

One concept I’ll elaborate on. In the twentieth century the human quest and drive and our utter meaning originated and was inherent in the ‘masses”. We needed the masses to work, to spend, to vote, to fight in our wars. The engine and framework of society was dependent upon the masses – as Marx knew – and all efforts were directed to ensuring the heath, safety and future of the masses. Politics catered to the masses; healthcare cured the masses and kept them healthy; production employed them and gave them stuff to consume. Nations thrived thanks to patriotic masses willing (or forced) to die for their country.

Today, think about politics, and consumerism, and healthcare. Do these industries and industrial complexes now exist to treat and care for the masses, or are they here to serve the select few, the 1%, the elite and super class?

Technology, big data, algorithms analyzing the very nature of consciousness is the new religion. Its not the tiny minds of humans that will know us and solve the big problems, but the Big Data that will very soon know us better than we know ourselves and thus dictate what we want and need. Big Data will know what’s best for us and rise and save us from ourselves.

Politicians and parties will not want every vote, just the highly targeted, polled, analyzed and gerrymandered ones that will get them elected.

Producers no longer need to mass produce products for the masses, but individualizes experiences for each of us. They know we want it.

And the healthcare industry… they are far from spending their resources aiming to cure the sick. They are now focusing their efforts on strengthening the healthy and defying death.

We silly humans are letting it all happen. The future dominance of the machine, has begun by allowing our day to day, mundane choices chip away out our utter humanity.

This entry was posted in Parsing Palimpsests. Bookmark the permalink.