I’ll skip the preamble about jam packing the Jeep, double parking illegally in Manhattan to load our outfits and gear and the uneventful ride down Route 27 to the Montauk Point. This is a fishing report damn it, not some buddy buddy, road trip movie where two long time friends grow closer and bond on the lonely highway. Nah.. this is about the fishing!! I’m sitting in my leather chair wearing my waders, typing with my finger-less typing gloves on the keyboard, unspooling my imagination and casting deep into my memory to land an epic fishing story a la Old Man and the Sea. Or, I’ll just scribble away a litter literary rat. Either way, let’s land this MoFo!

We took in as much as we could. Pounced on the shore beneath the beacon of light to scout and get our feet wet. Our surf-caster’s eyes took in the structure and the way the water was interacting to note good strategic rocks and what the water looked like, making it easier to target in the dark later.

After a short spell spearing the rip tide, we ventured back inland like a couple of old landlubbers and hit Paulies Bait Shop hoping for a hookup on some braid for our reels, but immediately changed gears, changed plans and turned backed to the surf as Paulie said “The tides calling boys, ’tis the hour when the sea giveth to those best prepared to gun the ebb, fish the jib with crooked sails to crack the limb, wager its bet to tip the scale in thy direction.” We stood in shocked silence, nearly in awe. Paulie’s face turned a touch sadder as he realized these two Jersey Boys knew not what he speaketh. So, he repeated his words in our language: “Nos if the time to fish, as the tides come in and as dusk settles in on the point.”

Back to the point we went, eager to land a bogie, sweaty top or a a decent pail head. It was dusk, wind blew in a few square knots from the South-North, rough water tons of bait but – no fish. A dark mass floating in the water, just beyond reach of our shoulder-straining casts. It was Seal, promo tour for his latest album. Or a harbor seal perhaps, scaring away our stripers. Alas, first day nothing.

Things did not fair better back at the homestead. The bread was wheat with grain and started out with some potential, a promise for better things, but then slimy turkey, a slice of pork skin and squarely placed cheese made for a lackluster dinner.. but a splendid supper for the eager casters ready to hit the surf in the am for the first full day of fishing!

Do donned our outfits, fixed each others straps, and hit the boulder strewn shoreline. Our rugged, all terrain , 4×4, black dynamo set the tone for the trip! She let out four 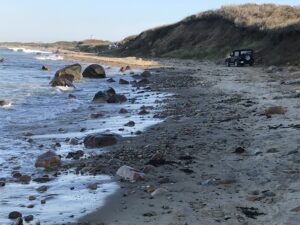 purposefully sighs of air – exactly 10 psi’s each – and we attacked the soft Montauk beaches and rocky shorelines. She got us to exactly where we need to go.. and to a few more places we should not have gone… and probably would have safely taken us to the places we were too scared to venture for fear of soft, sinking sand, or large axle crushing stones, or quickly rising tides or the cowardice of the new Jeep owner protecting his baby. But back to the fishing!

We waded into the surf looking for rips, bars, some light on flood and north side ebb – I mean, we ain’t stupid. The even flow was gentle like Eddie sang, the water not calm but clear, and a light breeze from the top. Strolling wet through the boulder strewn shallows – watching our footing.. when BAM! It happened. A strike. My fingers instinctively tightened around the rod, arms heaving the pole skyward as I set the hook on what was surely a mass of seaweed….. when it moved. Away from me. Tip of the rod bent and the fight was on! I did not know what the jerk on the end of the line was, but I was hooked. It moved, darted, struggled against me as l pulled, reeled, stepped backwards slowly as I guided the beast to the shoreline. A striper, hooked clean. Fish first of the trip, my first ever. It spanned ankle to over my knee, approximately 23”. Not a keeper, but one kept forever in the cooler of my mind.

James considered racing back to shore to celebrate and help, but then BANG he got one. A few moments later BAM I got another. Then moments later – BOOM James got a fourth. We were not fishing.. we were catching!! 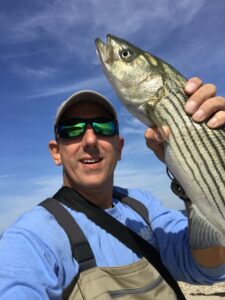 Then nothing. The ten minute fury evaporated… and for the next 10 hours.. there was nothing but casting.. and dreaming… of the hunt.. the big one… and then at the end dreaming of anything… a peanut bunker, rain bait, juvenile herring, American eel a needlefish…. seaweed… a bullet nose, crackle face, toe-foot or even, dare I say it, I would have settled for the dreaded neck butt…. anything.

Night fell and we popped and threw metal and drove and walked the coastline, but nothing more. So we left them biting to head home for supper.

Day 3 – Swashbuckler
This day, the Gods of Fishing smiled upon us. Started on the Jetty to the Lake Montauk inlet, but we knew in our bones there was something calling us. We aired down the Jeep, entered Gin Beach – illegally it turns out, for our pass was not the right one – and drove along the coastline following Jamie’s trusted fishing gaze. He was locked in on a point in the distance. I turned to look and he was staring out the Jeep’s unzippered window, eyes locked at the intersection where brilliantly blue skies blended with crystal clear blue water… I saw the turbulent waves in the distance reflected in his pupils. It was gonna be a great day.

We drove on, following his vision… steering around RV crushing boulders, gull-infested coastlines, patches of boulders the size of bowling balls, we drone on.. past Big Rock, then First Rocks, followed by Second Racks… then around tight squeezes around eroding cliff walls, we were there: Shagwong Point, or as we call it the “Swashbuckler”.

Again ebb, blue… clean.. calm… light breeze. The Jeep did not take us out of the Northern hemisphere, but we could have sworn were parked in paradise. We saw a few fishermen in the same area working the plugs and pencils. They were a small guide led group, surfcasting for the first time. Ha.. newbies! The guide showed them how to cast and BOOM – he got one. We all dug in.

Nothing.. not even schoolie, fuzzy drum, bent head, muzzle foot or elbow stink. Until, BAM, I got one! Sweetness indeed. Perfect spot, perfect day, perfect sensation of standing waist deep in the water, pressure waders squeezing my legs tight, waves splashing at me and sending my utility belt bobbing in the waves… perfect… then BOOM.. opps.. I mean, BAM… a striper.

The students gazed at me in awe. That’s right, I was was trained in the School of Moadib, the University of Jingles. The Sporto Institute for catching Mofo fish!!

Moments later.. BOOM another. A Blue! Sweetness, a good 28”s, caught way out in the sea the moment the popper splashed down. Hellofva fight all the way in. Before this portion of the day over.. BANG.. then BYGOSH.. I ended up with four. Sun came up from the hill behind us and bite stopped. We moved on.

We bounced around.. aired up.. aired down…walked the beach.. walked the surf… ate canned fish… power bars.. in the surf.. in the calm.. saw some anglers out on rocks everywhere we went.. but no one catching nuttin’.

“F This man, lets’ head back to the Swashbuckler!”

And that we did.. and we CAUGHT FISH!

Jamie broke his dry spell with a vengeance. Striper after striper after Blue after striper. I hauled in a few more of each as well, until my stiff fingers, aching shoulders, and all around joyous exhaustion started wreaking havoc. I could not cast right. I created beautiful bird’s nest on the reels. Each time, that generous Jamie, my teacher, my Mater, swapped poles and re-rigged my rig as I used his pole and whatever he was throwing and caught more fish.

I bowed defeated. I was simply at the end of my line… and sat and watched Jamie pull in one after the other after the other. No one else around us catching anything. In fact, we saw no one else catch a fish all weekend long.

A glorious day on the point. Could not have been better!!

Heading out at dusk, as the Jeep’s headlights bounced up and down and pitched and rolled I soaked in the days efforts and joy… what more can one ask for?

Back at the homestead, a spectacular day of fishing and catching.. was topped off only by a spectacular dinner. A feast dare I say! Supper was marvelous .. fresh slices of gobble gobble, some sort of 7-11’s finest meats stuff, rolled dogs of pork by-products and cheese angled out on hearty bread. A fine ale, a beefy tumbler of Herradura and a feast for for kings of the sea!

Day 4 – Lounging in the Surf
Well, the jig was up on our illegal Gin Beach run and we were denied meeting up with and driving out to the Swashbuckler for the last day of tide casting. So… we made the best of it.

It was wet, rainy, and new Jeep owner guy was scared of driving out in wet, soft sand, so we were forced to stay close and face the windy, choppy waters. I was full of piss and vinegar (and canned fish, Fritios, and Slim Jims) and attempted to follow Jamie’s lead wading deep into the angry sea, but alas, I could not go half as far as Mr. Hemingway over there. He’s in the surf, in his gear, up to his tits as water and waves are rolling and heaving over his chest, neck face and head every 17 seconds. Sporto indeed!

I fall, flounder, cast into the wind – then spit into the wind to top off my final day. At one point, as I try to untangle both my hands and left foot from a colossal bird’s nest that has encompassed my reel, while struggling also to pull the treble hook out of my left elbow and dislodge my right foot from a slimy, yet firm and sucking mass of seaweed – I look over at Jamie and this guy is lounging against a boulder facing the raging sea. Waves slamming him, submerging him, slapping him silly, but he just sits there, leg dangling casually as he casts his popper again and again effortlessly. For a moment, through the spray of the waves, I see Jamie and he’s wearing a thick, high collared wool sweater and a large pipe jets out of his mouth. But it must have been the sun in my eye, or the gull shit that splattered my face obliterating anything I thought I saw.

All in all.. I’ve been using the word “Epic” to describe the trip. Could not have been better my friend. Lets do it again Papa!!!

This entry was posted in On The Road. Bookmark the permalink.