So, I just finished an epic biography of Charles Schulz, the creator of Peanuts (Schulz and Peanuts: A Biography). For me Charlie Brown and gang were such meaningful characters to me, Peanuts in general a meaningful cartoon strip. In addition to Peanuts bed sheets, wall hangings (still have one today) and countless snoopy dolls I had small paperback books of the Peanut’s strips probably purchased at school book fairs. They touched me. As a kid, I found peace in the little square boxes. I felt these characters spoke with my voice, questioned what I questioned, expressed silent rage and insecurities that I felt.

As I got older, I never forgot about the strip nor the impression it left on my emotions and I carried with me many specific memories how certain strips made me feel. One strip in particular I spent years searching for in old books and antique stores. I wanted to find the exact little paperback book with the exact same strip to which I burst with glee as I read for the first time alone in my childhood bedroom. I did not remember any details of the book,  but after searching for years finally, in an antique store, I found a half dozen paperback books and in the store,  as I sat and read each page, I found the exact strip I recalled from my childhood. It now hangs framed on my wall.

I knew Schulz was sad and lonely, but after reading this book it becomes even more painfully clear his deep depression and unprocessed sense of loss and insecurity. A man who was the most popular cartoonist the world had ever seen at the time –  a captain of a multi-billion dollar industry before such things happened – was deeply sad and alone. Failed marriages and an utter inability to bond to his many children kept him alone, disconnected. The only thing he had was his strip.

He was the first cartoonist to never ask for help in creating his daily output. No outside ideas, no help drawing or setting the type. He created with his one hand nearly 20,000 frames of his cartoons that appeared on newspapers and countless products all over the globe.

His strip was his life. He processed emotions, confronted hard realities and expressed his utter doubts and inner fears and anxieties through the innocent children and loveable dog that millions cherished as much as he had.

Since he started in his first newspaper in his mid twenties he never took a vacation, never missed a deadline, never had a break in the weekly publication of his strip. Except for once, when he was 80 and suffered a heart attack. Papers ran reruns for two weeks while he recovered. Afterwards, for a few month months she trudged on with a shaky hand and continued his run. But age caught up and he could not deny the fact he could not continue the demands of the strip’s output.

He set a retirement date. Drafted a letter to all of his worldwide fans, then crafted his final Peanuts panel. He then sent it to his publisher. Two weeks later, on a Sunday, the final Peanuts strip hit the streets…. only hours ofter Charles Schulz passed away.

Peanuts was his life, literally. It was the ONLY way this man faced himself, his truths and expressed and processed his feelings. No human, wife, child or friend could provide this outlet for him. He could not connect with anyone or anything. It was only his cartoon characters kept him going and literally kept him alive.

Geez… no wonder as a small child this strip spoke to me. 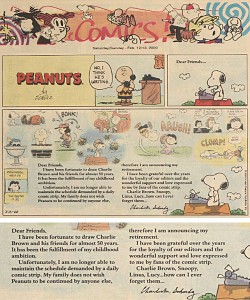 This entry was posted in Parsing Palimpsests. Bookmark the permalink.